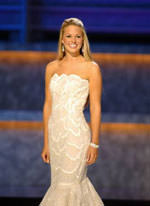 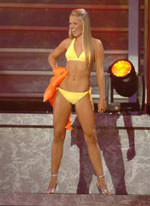 At 17 years old, Ohio's Allie LaForce is not your typical beauty pageant contestant. In fact, if given the choice, she would rather "shoot hoops," than wear an expensive evening gown. But after being crowned the new MISS TEEN USA 2005 on August 8th, live from Baton Rouge, Louisiana, she proved to the world that she can do both.

Now in her junior year at Vermilion High School, Allie LaForce is first in her class, and a self described jock. Among her extracurricular activities, she plays volleyball and Varsity basketball, and is a pitcher on her school's Varsity fast-pitch softball team. Allie's talent doesn't lie solely on the field; she is also an on-camera interviewer at her high school football games, where she is able to speak with players and fans in the midst of all the action.

At 5'8 with blonde hair and blue eyes, Allie LaForce takes after her mother, Lesa LaForce, Miss Ohio USA 1977. The oldest of three children, Allie has always set the standard for her younger brother and sister, and enjoys being their role model. "I have the opportunity to lead by example and wouldn't want it any other way," she says. Fortunately for her siblings, Allie has accomplished more at 16, than many do in a lifetime. She has worked with, and contributed generously to, a number of charities, including "Friends of Lorain Foundation," (an organization that raises money each year for someone in need), "Day of Caring," (a program where volunteers read to children, and lift their spirits), "Relay for Life," (Allie walked laps around her high school track to raise money) and "Spring Spruce Up," (assisting the elderly at their homes by cleaning up their yards and planting flowers ), among others.

Most impressively though, Allie LaForce established her own charity event called "Teens for Tsunami," where she raised over $1,200 in the state of Ohio to support the victims of the Tsunami through the Red Cross. She heightened awareness by organizing a talent show at her high school as well assemblies at surrounding schools. In addition, Allie reached out to her fellow Miss Teen USA state titleholders who were eager to support her and the cause, ultimately saving lives.

Allie plans not only to continue her support and dedication to charity organizations, but also intends to live out her dream of studying broadcast journalism and pursuing a career as a sports reporter. Allie's love for sports and people is inherent. "Why can't I be a jock and lady at the same time? I can," Allie says.